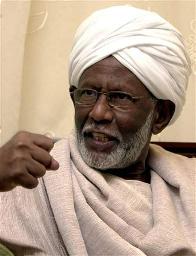 [This post is a bit overdue, but I suppose its better late than never. I promised that I was going to post more information about my research into the Sudanese connections of al-Fuqra's Sheikh Gilani, so here it is].

As a reminder, or as a primer for those not familiar with my previous posts, Shiekh Mubarik Ali Gilani is a mystical Sufi cleric from Pakistan. He founded the militant group known as Jamaat ul-Fuqra, or al-Fuqra, in 1979. The al-Qaeda and ISI-affiliated group exists to recruit and train fighters and to wage jihad for the pupose of purifying Islam. A front organization known as Muslims of the Americas numbers some 3,000-5,000 supporters in the US, the Caribbean, and Canada. Gilani has additional followers in the UK, Mexico, and Sudan. It was Sheikh Gilani that Daniel Pearl was investigating and attempting to meet with when he was kidnapped and executed in Pakistan.

Early on in my research, I found this passage in a very informative background article on Gilani from The Weekly Standard revealing evidence of a Gilani connection to Sudan, a state sponsor of terrorism, and various terror organizations (emphasis mine):

Even more damning is footage filmed in December 1993 by the Canadian Broadcasting Company when it covered a major jihadist conclave in Khartoum. The meeting was sponsored by then-Sudanese strongman and terror impresario Hassan Abdullah al-Turabi. An urbane, Sorbonne-educated Islamic scholar, Turabi had engineered a strategic alliance among Sunni-dominated Sudan, Shiite Iran, and Pakistan. With funding and expertise from Iran, Turabi made his country the launching pad for the first attack on the World Trade Center.

Turabi also created the Popular Arab Islamic Conference (PAIC) as a vehicle for bringing together Sunni, Shiite, and secular, heretofore Marxist, terrorist groups. The 1993 PAIC conference in Khartoum was a who's who of Islamist terror. Mullahs from Iran and Afghanistan were there, along with delegates from Hamas, Hezbollah, Palestinian Islamic Jihad, the Popular Front for the Liberation of Palestine, and the Democratic Front for the Liberation of Palestine. Two generals, one of them a former chief of the ISI, and an adviser to Prime Minister Benazir Bhutto led the Pakistani delegation. Osama bin Laden, not yet a kingpin but living in Sudan while developing the organization and funding for his nascent network, was there. So was Sheikh Gilani: Foreign journalists placed him in the company of an unnamed Pakistani general and another man they took to be an "ex"-Pakistani intelligence official. In the evening, large crowds regaled the assembled jihadists with chants of "Down, down USA! Down, down CIA!," and (in Arabic) "Death to the Jews!"

From the Rocky Mountain News:

Jilani...attended a December 1993 meeting in Sudan that included members of Hezbollah, Hamas and Islamic Jihad.

"I know Jilani was there," said Fenger [an investigator who helped build the case against the Colorado al-Fuqra members], "and there was a huge group of Somalis," a group among whom there are many bin Laden supporters. 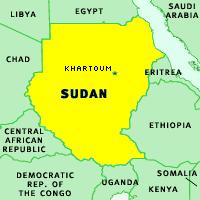 Gilani's connections to the Sudan do not end there, however. It's worth noting that bin Laden associate, Wadih El-Hage, who spent time in Sudan from 1992-1994, had connections to two incidents in which al-Fuqra members were implicated -- the murder of Tuscon imam, Dr. Rashad Khalifa, and the 1993 attack on the World Trade Center.

A while back, I asked a former member of al-Fuqra, with whom I've corresponded a number of times, about Gilani's attendance at the above-mentioned terrorist meeting in Sudan. Here's what he had to say:

CP: I read that the Canadian Broadcasting Company has a video of Gilani visiting Sudan back in '93 at a meeting of terror groups.

Source: YES. I know of this. That was the first council of jihad. Gilani was the one who orchestrated it.

Source: Yes, reps from al-Qaida, Tahir ul-Mujahideen, Lashkar-e-Taiyba, all of them. And, Jamil al-Amin was there as well, former H. Rap Brown.

According to him, Gilani has many followers in Sudan, including a prominent politician. Hm. A politician? Interesting.

It seems that on December 16, 2002, Dr. Malik Hussein, a Member of the Sudanese Parliament, visited the Muslims of the Americas (MOA) village known as Holy Islamville in York, SC. According to an MOA website [iqou-moa.org], he was there to visit the Baitun Noor shrine [baitunnoor.org] and witness the "miracle" that has occurred there. There is a video of this on the MOA website. It is claimed that during Ramadan 2002, the names of Allah and Muhammad miraculously appeared in light on the wall of their masjid.

The video is obviously propaganda, and poor propaganda at that. Hussein, Gilani, and an unnamed woman appear on the video. I'll put it this way, they're not what you would call polished televangelists. Aside from the questionable story about the "miracle" and the supposed verification by local non-Muslims, they claim that major international media outlets came from all over to cover it. Truth is, I have yet to find a mention of it in the web archives of any of the local newspapers and the Islamic Post, which they mention and display, is Gilani's own newspaper.

The whole purpose of this charade is so that Gilani can continue to feed his brainwashed followers a sort of mystical legitimacy...and, so he can sell videos of the "miracle" and make money. [see here] However, any idiot with a stencil and a projector or special stage light, could reproduce this "miracle".

Following his visit to South Carolina, Hussein then traveled to Lahore, Pakistan to pledge his allegiance to Sheikh Mubarik Ali Gilani himself.

Some additional background on Dr. Malik Hussein - he is president of the Sudanese Data Bank, and a member of the Pan-African Parliament of the African Union, where he chairs the Committee on Agriculture. In 2000, Hussein ran for the presidency of Sudan representing the Independent Democrats (he received about 1.6% of the vote).

Searching through Sudanese news articles, I discovered some additional and rather troubling information about Hussein.

For example, here is a brief note in a Panafrican News Agency story about the Sudan election dated November 15, 2000:

...Malik Hussein, an Islamist with strong affiliations to Hassan Turabi, the fomer speaker of parliament...

And another story from December 13, 2000 mentions:

Presidential candidate Hussein is a veteran politician who had served as adviser to former President Ga'afar Nimeri for Southern Sudan Affairs (1984-85).

He is known for his strong links to Hassan el Turabi, the ousted speaker of parliament.

Here we have an associate of Turabi traveling from Sudan to one of Gilani's camps in the U.S. and then visiting Gilani in Pakistan. Could Hussein be a go-between for the two terror masters?

The camp in South Carolina is known to have harbored several Fuqra operatives linked to criminal and terrorist activities (see here). Is it possible that this was not just a religious pilgrimage? Could this trip have been cover for something else, say a courier operation? Fuqra members have always operated covertly. According to my source, most of the members of the Muslims of the Americas, at least the younger & newer members, are generally unaware of Fuqra's real history and of its secretive activities. The ones that do know deny everything.

Why was this man in the United States? I find it a little difficult to believe that a foreign member of parliament (with ties to terrorists) travels from Khartoum to a town in rural South Carolina 6,800 miles away just to see a light projected on the wall of a mobile home trailer. 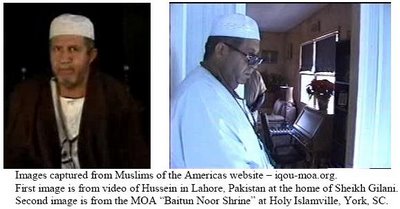 As I have mentioned before, the radical Islamic encampment in York County, SC lies along a powerline easement that leads to the Catawba Nuclear Station, just six miles away. It is the third largest generator of nuclear electricity. 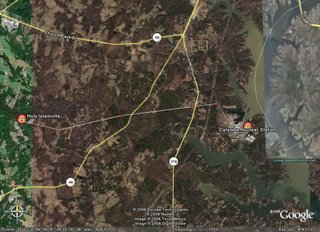 Thus, the connection between Gilani and Turabi is more than a little discomforting. In 2005, the Weekly Standard published a two-part article on Hassan al-Turabi. They dubbed him "The Pope of Terrorism" (Part I, Part II).

UPDATE: Here is the video of Hussein's visit to South Carolina and Pakistan